The PQ duration depends on the conduction velocity in the atria, AV node, His bundle, bundle branches and Purkinje fibers

A prolonged PQ interval is a sign of a degradation of the conduction system or increased vagal tone (Bezold-Jarisch reflex), or it can be pharmacologically induced.

This is called 1st, 2nd or 3rd degree AV block.

A short PQ interval can be seen in the WPW syndrome in which faster-than-normal conduction exists between the atria and the ventricles.

The QRS duration indicates how fast the ventricles depolarize. The normal QRS is < 0.10 seconds

The ventricles depolarize normally within 0.10 seconds. When this is longer than 110 miliseconds[1], this is a conduction delay. Possible causes of a QRS duration > 110 miliseconds include:

For the diagnosis of LBBB or RBBB QRS duration must be >120 ms. 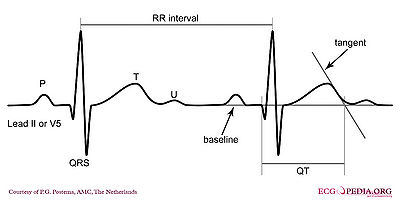 The QT interval starts at the onset of the Q wave and ends where the tangent line for the steepest part of the T wave intersects with the baseline of the ECG.

The eyeballing method to estimate QT prolongation. If the QT interval ends before the imaginary boundary halfway two QRS complexes, the QTc is probably normal. If the QTc reaches beyond the halfway line, the QTc is probably prolonged. This method is only 'valid' in registrations with normal (60-100/min) heart rates.

The normal QTc (corrected) interval The QT interval indicates how fast the ventricles are repolarized, becoming ready for a new cycle.

In a recent ACC consensus document an expert writing group suggest that in a hospital setting the upper limit be raised to the 99th percentile of normal: 470ms in males and 480 ms in females, as approximately 10% to 20% of the general population have a QTc > 440m s. For both men and women QTc > 500ms is considered highly abnormal.[3]

If QTc is < 340ms short QT syndrome can be considered.

The QT interval comprises the QRS-complex, the ST-segment, and the T-wave. One difficultly of QT interpretation is that the QT interval gets shorter as the heart rate increases. This problem can be solved by correcting the QT time for heart rate using the Bazett formula:

Thus at a heart rate of 60 bpm, the RR interval is 1 second and the QTc equals QT/1. The QTc calculator can be used to easily calculate QTc from the QT and the heart rate or RR interval.

On modern ECG machines, the QTc is given. However, the machines are not always capable of making the correct determination of the end of the T wave. Therefore, it is important to check the QT time manually.

Alternatives to the Bazzett correction formula are the Fridericia, Framingham and Hodges formulas. The latter two perform better at high heart rates (>100 /min). [4][5]

Although QT prolongation is potentially lethal, measurement of the QT interval by physicians is not standardized, since different definitions of the end of the T wave exist.[6] Most QT experts define the end of the T wave as the intersection of the steepest tangent line from the end of the T-wave with the base line of the ECG.[7] This leads to the following stepwise approach:

In a pathological prolonged QT time, it takes longer than the normal amount of time for the myocardial cells to be ready for a new cycle. There is a possibility that some cells are not yet repolarized, but that a new cycle is already initiated. These cells are at risk for uncontrolled depolarization, induction of Torsade de Pointes and subsequent Ventricular Fibrillation.

If the QT segment is abnormal, it can be difficult to define the end of the T wave. Below are a number of examples that suggest how QT should be measured in these patients.