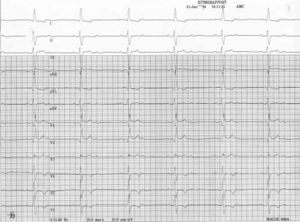 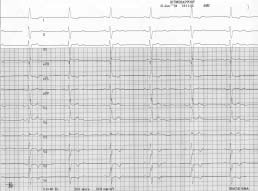 This is a typical example of ventriculophasic sinus arrhythmia: PP intervals encompassing a QRS complex are consistently shorter than those without an intervening QRS complex. It is most likely that arterial pressure-induced changes in baroreceptor-mediated vagal input to the sinus node underlie this phenomenon.

Obviously, one cannot be absolutely certain about the level of the 2:1 AV block. Nevertheless, there are several clues. The QRS duration is 160 ms and QRS axis is about -45o indicating peripheral conduction disturbance and, thus, block at the infra-His level. Also, the fact that this case involves a symptomatic, female patient older than 60 years with structural heart disease favours infra-nodal disease.

The PR interval is prolonged at 240 ms. In the presence of a narrow QRS complex this would have been suggestive of an AV nodal conduction disturbance. In this case, however, the QRS is prolonged and coexistence of nodal delay cannot be ruled out. As discontinuation of digoxin did not affect the PR interval, it is concluded that severe impairment of intraor infra-His conduction is the cause of the long PR interval. She became free of symptoms after implantation of a DDD pacemaker.