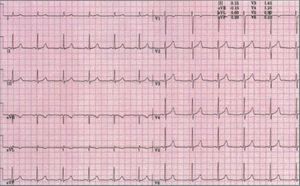 A14-year-old boy died suddenly while playing soccer. He was in the middle of a sprint when he suddenly succumbed. Resuscitation efforts were unsuccessful. His family assured us that he had had no previous symptoms and that his family history was unremarkable. His two-year older brother, however, remembered that he had also collapsed once while playing an exciting soccer match. This occurred at the age 10, after which he experienced no further events. His brother’s death worried him (and his family) and he visited a cardiologist for medical advice. Physical examination was unremarkable; his ECG is shown in figure 1. An echocardiogram was completely normal. 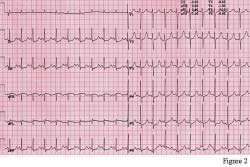 The ECG shows sinus rhythm (70 beats/min) with a normal QRS axis. PQ interval and QRS width are normal. Repolarisation is completely normal and the QTc interval is 384 msec, well within normal limits. Hence the ECG is completely normal. From the history of the patient and from his family history it became clear that both events (his collapse and the circumstances of his brother’s death) were triggered by exercise. An exercise test should therefore be part of the cardiological work-up. Figure 2 shows the ECG after six minutes of exercise. There is still sinus rhythm, 130 beats/min, and conduction intervals remain normal. The QT interval is now markedly prolonged and approaches 530 msec (QTc: 527 msec). This response should raise suspicion of a long-QT syndrome, type 1 and in conjunction with the symptom(s) β-blockade therapy is warranted. Molecular genetic screening indeed revealed a mutation in the KCNQ1 gene. Type 1 LQTS is characterised by QT prolongation, in particular during exercise. The QT interval fails to adapt to an increase in rate and therefore inappropriately prolongs with an increase in rate. In conjunction, events (dizziness, syncope and sudden death) are typically triggered by adrenergic stimuli among which exercise. Other typical triggers are diving and swimming; the age of onset of symptoms is usually around five years. A careful family history should be taken. Treatment of choice is a β-blocker, in symptomatic patients titrated up to the highest possible tolerated dose. Asymptomatic young patients should receive prophylactic treatment but asymptomatic individuals over 20 years of age with a QTc interval <500 msec seem to be at low risk. Molecular genetic screening is mandatory; LQT1 is caused by mutations in the KCNQ1 gene encoding one of the main repolarising potassium currents.