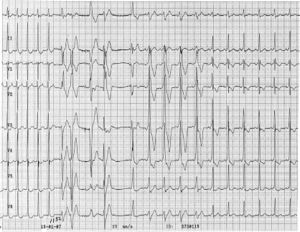 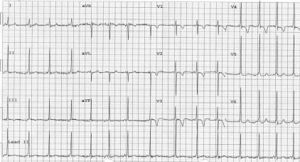 A 14-year-old girl complained of palpitations that occurred numerous times a week. There were no special triggers and, usually, by deep breathing she was able to stop it. During one of the episodes she visited the emergency department. Physical examination revealed no abnormalities with exception of a fast regular pulse (185 beats/min). A deep breathhold did not stop the tachycardia this time and adenosine was administered intravenously. The ECG (leads I, II, V1 to V6) shortly after the bolus adenosine is shown in figure 1.

The left part of the ECG shows a narrow complex tachycardia with a rate of 200 beats/min (RR interval 320 ms). At first glance a P wave is not clearly discernable. After five cycles, the tachycardia suddenly stops and four multiform complexes are seen without any P waves. These complexes should be regarded as a polymorphic ventricular tachycardia, which is not uncommon after an adenosine-terminated supraventricular tachycardia.[1] A fifth complex is preceded by a P wave. The subsequent four complexes are morphologically similar, all show a widened QRS complex and all are immediately preceded by a P wave. The initial phase of the QRS complex is slurred and positive in all available leads. Sinus rhythm continues thereafter with gradual abbreviation of the QRS complex until a 120 msec wide QRS complex remains. A close look reveals that the PQ interval remains short and that the initial phase of these QRS complexes is still slurring.

All tachycardias that include the AV node in their circuit are sensitive to adenosine. This includes AV nodal reentrant tachycardia and AV reentrant tachycardia. Conduction through the AV node is temporarily blocked by adenosine and the fact that AV conduction is still present (the four similar wide QRS complexes preceded by a P wave) suggests the presence of an alternative AV connection. (i.e. a Kent bundle). After restoration of the AV node both pathways are used. Hence, the initial polymorphic ventricular tachycardia is followed by restoration of sinus rhythm, initially exclusively conducted over an accessory pathway, followed by preexcitation and normal AV conduction. Figure 2 shows the ECG during sinus rhythm. A discrete Δ wave is clearly visible. The morphology of the Δ wave suggests a left posterior Kent bundle.

Conclusion: Wolff-Parkinson-White syndrome with an orthodromic circus movement tachycardia and under the influence of adenosine temporarily exclusive preexcitation.