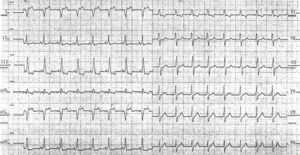 A 28-year-old male was referred because of an abnormal ECG. He was having occasional palpitations. His family history is unremarkable. Physical examination revealed no abnormalities. His ECG is shown in figure 1 (standard calibration: 25 mm/s and 10 mm/mV). 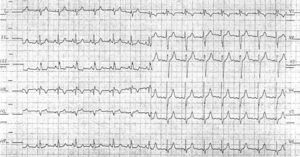 The ECG shows sinus rhythm (90 beats/min). The electrical axis is shifted to the right. The PQ interval is short (100 ms) and the QRS width is wide (120 ms). There is initial slurring of the QRS complex, which is positive in leads II, III, aVF, V2 to V5 and negative in leads I and aVL. This indicates an initial electrical force away from the left lateral free wall and can only be based on activation via a Kent bundle, located in the left lateral free wall. However, the terminal portion of the QRS complex is slurring as well. It is negative in the left lateral leads (I, aVL, V6) and positive in lead aVR indicating a terminal force in the upward right direction, which is obviously not explained by the intial ventricular activation via the left lateral accessory pathway. This configuration is compatible with right ventricular delay (i.e. right bundle branch block). The lack of a terminal R in lead V1 might be due to a slightly lower placement of this lead. Hence, ventricular activation is the result of pre-excitation via a left lateral Kent bundle and AV nodal conduction with a pre-existent right bundle branch block. Figure 2 shows the ECG (standard calibration) after RF ablation of the bypass which indeed was located in the left lateral wall. The PQ interval is longer and the initial activation is now normal. As already anticipated from the above analysis, the terminal right ventricular activation and the QRS width are compatible with coexistent right bundle branch block.