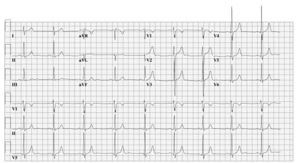 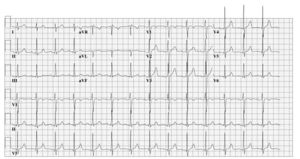 An otherwise healthy 32-year-old male was referred with palpitations. Attacks had been occurring monthly for several years, predominantly at the start of exercise (he is an enthusiastic sportsman), lasting minutes to days. Sotalol had been prescribed but almost immediately discontinued several months previously due to bradycardia. The patient was on no other drugs, and rejected further pharmacological treatment. Physical examination, stress-test and cardiac ultrasound were all normal. Atrial fibrillation (AF) had been documented repeatedly, and the patient was scheduled to undergo pulmonary vein (PV) isolation. Figure 1 shows his preablation ECG; figure 2 is typical of all postablation ECGs during the three months of follow-up.

What is the obvious difference, and how could you explain it?

Both ECGs show normal sinus rhythm, the obvious difference being the rate. This athletic patient invariably had sinus bradycardia before ablation, but had noticed on counting his pulse that since treatment it was always about 80 beats/min at rest. He had no symptoms, no recurrence of AF, and is currently in training for the marathon. Cardiac ultrasound was normal, and he is not on medication. The clue to this highly consistent rise in sinus rate almost certainly lies in autonomic effects of ablation in the posterior left atrium. During treatment, extensive linear ablation was performed as described by Pappone et al.[1] encircling the pulmonary veins, in addition to lines of block between the mitral valve annulus and left inferior PV, posterior in the left atrium, and between the two superior PVs in the roof of the left atrium; a line of block was also created in the cavotricuspid isthmus in the right atrium. This ‘catheterbased Maze’ procedure aims to debulk and compartmentalise the left atrium and isolate PV-related driving foci, hence preventing AF. Parasympathetic ganglia juxtapose the posterior left atrium, and have been demonstrated to be effected (i.e. ablated) during catheter ablation in this area, further modifying the substrate of AF.[2] The subsequent autonomic modulation may partly cause the clinical effects of this procedure by reducing vagal tone, this in turn prolonging the atrial refractory period. Similarly, the decrease in vagal tone may be held directly responsible for the rise in resting heart rate in this patient.