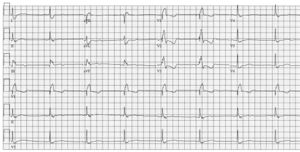 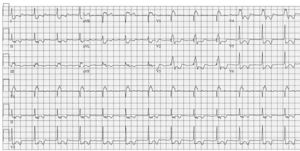 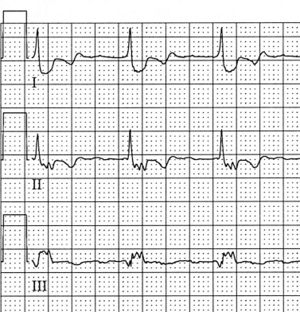 A 63-year-old female was referred to our outpatient clinic with symptoms of palpitations. These had been occurring in paroxysms since 2002, and were highly drug refractory; she had undergone numerous DC cardioversions. Her ECG in sinus rhythm is shown in figure 1, during symptoms in figure 2, with a blowup in figure 3. Her prior history provides the solution to the following questions, which you might nonetheless try to answer without additional information.

The patient’s ECG in sinus rhythm demonstrates right bundle branch block, but more remarkably an extreme prolongation and fragmentation of the terminal portion of the QRS complex. In addition, the QRS complex in V1 has an initial Q wave. This combination of findings should suggest significant right ventricular overload and conduction delay. In and of itself, this must suggest some form of right ventricular disease. During tachycardia, QRS morphology is unchanged, indicating supraventricular tachycardia (SVT), but the original P wave is absent. Close examination, as illustrated in figure 3, reveals low amplitude and highly fragmented P waves, negative in V1 with a superior axis, cycle length 280 ms with 3:1 AV conduction. P-wave morphology also indicates right-sided pathology. All in all, this combination of right ventricular conduction abnormality and right atrial tachycardia should suggest a congenital heart defect involving the right heart. This was indeed the case in this patient: she had undergone correction of secundum type atrial septal defect at a young age. More importantly in light of onset of symptoms in 2002, tricuspid valve reconstruction was performed in that year because of Ebstein’s anomaly. Ebstein’s anomaly is a relatively rare condition, accounting for no more than approximately 0.5% of congenital heart defects. It is characterised by an abnormal septal leaflet of the tricuspid valve with apical displacement, leading to atrialisation of part of the right ventricle.[1] While morphological and subsequent haemodynamic consequences may be mild, severe tricuspid regurgitation also occurs, as was the case in this patient and the reason for her surgery. Considerable conduction delay in this atrialised and dilated portion of the right ventricle has been demonstrated to cause QRS fragmentation and prolongation in classic electrophysiological studies[2] and more recently signalaveraged ECG;[3] figure 1 is a classical example of this phenomenon. Onset of atrial arrhythmias in such close conjunction to cardiac surgery involving right atrial atriotomy must inevitably raise the suspicion of postincisional atrial tachycardia. This diagnosis was confirmed at electrophysiological study.