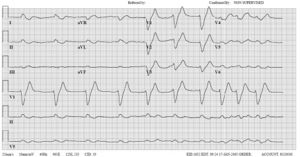 A46-year-old male was admitted to our emergency room with dyspnoea. His medical history included congestive heart failure with a left ventricular ejection fraction of under 10%, type II diabetes, gout, hypothyroidism and morbid obesity. Physical examination was severely hampered by the patient’s weight (in excess of 230 kg), but revealed signs of right and left heart failure. The ECG on admission is shown in figure 1.

What diagnosis does it suggest, what further information do you need, and how should the patient be treated? 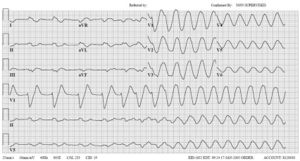 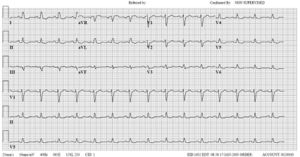 The ECG is remarkable due to the lack of P waves, and the extremely broad QRS (merging directly into the prominent T waves in rS complexes). A diagnosis of severe hyperkalaemia should be considered immediately. Laboratory work-up revealed the following relevant findings: sodium 127 mmol/l, potassium 8.8 mmol/l, creatinine 866 μmol/l, urea 63.4 mmol/l, and a metabolic acidosis with a pH of 7.08 and serum lactate 4 mmol/l. Acute renal failure was diagnosed as the cause, due to a combination of forward failure, high dose of furosemide, spironolactone, in addition to colchicine and an nonsteriodal anti-inflammatory drug (NSAID) prescribed because of the patient’s gout, compounded by the metabolic acidosis. The ECG in figure 1 is a classic example of the effects of hyperkalaemia: resting potential is reduced, partially inactivating the sodium channels, reducing the depolarising current and slowing atrial, AV and ventricular conduction. Flattening and finally disappearance of the P wave and broadening of the QRS complex result. Life-threatening ventricular tachyarrhythmias with a sinusoidal appearance may ensue in severe cases. Just minutes after the ECG in figure 1, the ECG in figure 2 demonstrated onset of ventricular tachycardia. Emergency measures were undertaken to lower the serum potassium (i.e. correction of acidosis, insulin and glucose iv, and calcium levulate iv). The patient survived this episode; the ECG in figure 3 was taken two days later at which time the serum potassium was normal. He died several months later of progressive heart failure.