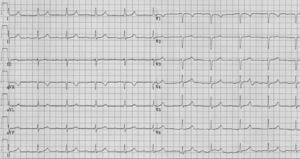 A 33-year-old lady visited the cardiologist because of the sudden death of her brother at age 35. He died while watching TV and had been without symptoms as far as she was aware. Her father received a pacemaker at the age of 48. She had no complaints of dizziness, palpitations, dyspnoea or chest pain. Her only complaint was some weakness in her arms shortly after lifting them to get something from above her head. Physiological examination did not reveal any peculiarities. Her ECG is shown in figure 1. Her echocardiogram is normal, although cardiac dimensions were at the upper limit of normal.

What is your diagnosis and what would your next step be?

The ECG shows sinus rhythm 60 beats/min. The QRS width is normal (80 msec) and the QRS axis is almost horizontal. Repolarisation is normal. The primary abnormality is the prolonged PQ interval (≥300 msec). In addition, the P wave has a very low amplitude (in all leads). The combination of prolonged PQ interval, lowvoltage P waves and the patient’s history of muscle weakness should raise the suspicion of a myopathy associated with conduction disease. The family history with one sudden death and a pacemaker in first-degree relatives narrows this down even more to a ‘laminopathy’ i.e. a disease linked to mutations in the lamin A/C gene. In that case referral to a recognised ‘muscle neurologist’ is mandatory. In our patient the neurologist found clear evidence of proximal myopathy. The clinical diagnosis limb-girdle disease was made and molecular diagnostic testing indeed revealed a mutation in the lamin A/C gene. The ECG findings are typical for Limb-Girdle disease type 1b (the variant linked to lamin A/C mutations). Conduction abnormalities almost always precede signs of cardiomyopathy, which only progresses to overt dilated cardiomyopathy in some cases. Particularly the conduction system is sensitive to damage, most likely increased fibrosis. In our patient the conduction system is affected (long PQ interval and undoubtedly a prolonged HV interval) and it is also likely that the atrial tissue is abnormal as well (low-amplitude P waves). For a long time pacemaker therapy was considered sufficient, but in recent years it has become clear that affected individuals are at risk for sudden death, even with a pacemaker.[1] Prophylactic ICD therapy at the time a pacemaker is implanted, usually in the 3rd to 4th decade, is now advocated.