Difference between revisions of "Pacemaker" 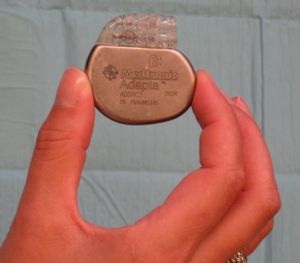 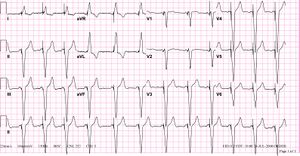 A pacemaker is indicated when the electrical impulse conduction or formation is dangerously disturbed. The paced pacemaker rhythm can easily be recognized on the ECG as it shows pacemaker spikes: vertical signals that represent the electrical activity of the pacemaker.

Pacemakers can be categorized according to the NASPE coding system, that usually consists of 3-5 letters.

The most often used codes are:

A full list of pacemaker indications can be read in the ESC guidelines on cardiac pacing [1]. A selection of class I indications are: chronic symptomatic third- or second degree (Mobtiz I or II) atrioventricular block. Syncope with sinus node disease. Alternating bundle branch block. Persisting AV block after surgery.