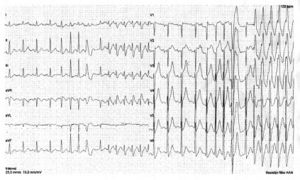 A 43-year-old man came to the outpatient clinic for preventive cardiovascular (CV) screening. During the last five years he complained of sudden onset of regular rapid palpitations during and after maximal exertion with dyspnoea. While holding his breath and working on abdominal muscular contractions he succeeded in ceasing these palpitations. This happened only a few times a year, but had been progressive in frequency and duration in the last six months. He had never collapsed during or after these palpitations. A cause had never been documented. His leisure time physical activity (6 hours/week) was long-distance running, fighting sports and fitness. There were no CV risk factors. His family history was negative. On physical examination his blood pressure was 125/85 mmHg, and there were no abnormal murmurs or heart sounds. Bicycle exercise testing (protocol 75 watts for five minutes, stepwise increment with 25 watts every minute) was normal (275 watts). Thereafter, a modified protocol starting at 75 watts for five minutes with instantaneous increase to 275 watts revealed the onset of a broad complex tachycardia (figure 1) with his usual symptoms. After ceasing and working on ‘his manoeuvre’ he managed to stop the tachycardia. In the 12-lead ECG the same episode is shown in the extremity leads (left side) and in the precordial leads (right side).