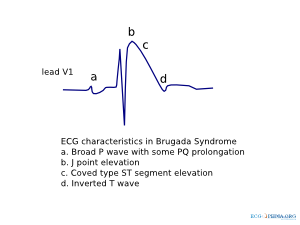 The Brugada syndrome is an hereditary disease that is associated with high risk of sudden cardiac death. It is characterized by typical ECG abnormalities: ST segment elevation in the precordial leads (V1 - V3). A recent study suggests that fractionation of the QRS complex is a marker of a worse prognosis in Brugada syndrome.[8]