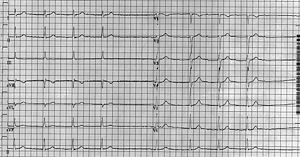 A36-year-old male comes to your outpatient clinic because of his family history. His father died suddenly at age 43 and his brother died suddenly at age 39. Both had documented dilated cardiomyopathy. He has no symptoms whatsoever. His ECG is presented in figure 1. Ten years before the current presentation he had an unremarkable cardiological check-up (ECG, echo, X-ECG).

What is the most likely diagnosis, what would be your next step and what would your eventual treatment be?

The ECG shows a supraventricular rhythm (60 beats/ min) where the P wave is only clearly visible in lead V1. The PQ interval is markedly prolonged (400 msec), QRS width is 110 msec with an intermediate electrical axis. From the rhythm strip at the bottom of the figure it is clear that the heart rate on the left side of the figure is similar to that on the right side which argues in favour of a regular supraventricular rhythm with very low amplitude P waves in the extremity leads. In the middle and on the far right the P wave is not followed by a QRS complex. As judged from lead V1 there is no preceding (further) PQ prolongation. Hence, a Mobitz II AV block should be diagnosed.

This ECG (very low amplitude P waves, impaired AV conduction and some intraventricular conduction delay) in combination with a family history of dilated cardiomyopathy is highly suggestive for a ‘laminopathy’, i.e. a familial dilated cardiomyopathy based on a mutation in the lamin A/C gene. A comparable ECG (without second-degree AV block) can be seen in a previous rhythm puzzle. A myopathy is frequently present as well, but neuromuscular tests in this case revealed no abnormalities. An echocardiogram revealed cardiac dimensions at the upper limit of normal, which perfectly fits with the diagnosis because frequently the conduction disorders precede LV dysfunction. A mutation in the lamin A/C gene could indeed be demonstrated. The ECG without doubt necessitates pacemaker implantation. Patients with laminopathies, however, seem to be at particular high risk for sudden cardiac death, even with a pacemaker implanted.[1] ICD implantation is therefore recommended when a pacemaker is considered. Results from a recent small-scale prospective study seem to underscore this policy,[2] but this study may have been hampered by selection of particularly ‘malignant’ families. The present family history, however, definitely warrants prophylactic ICD implantation in this case.