Approach to the Wide Complex Tachycardia

During wide complex tachycardia (heart rate > 100/min, QRS > 0.12 sec) the differentiation between supraventricular and ventricular origin of the arrhythmia is important to guide therapy. Several algorithms have been developed to aid in this differentiation (below). It is important to keep in mind that a good estimate of VT versus SVT can be made based on the clinical vignette: 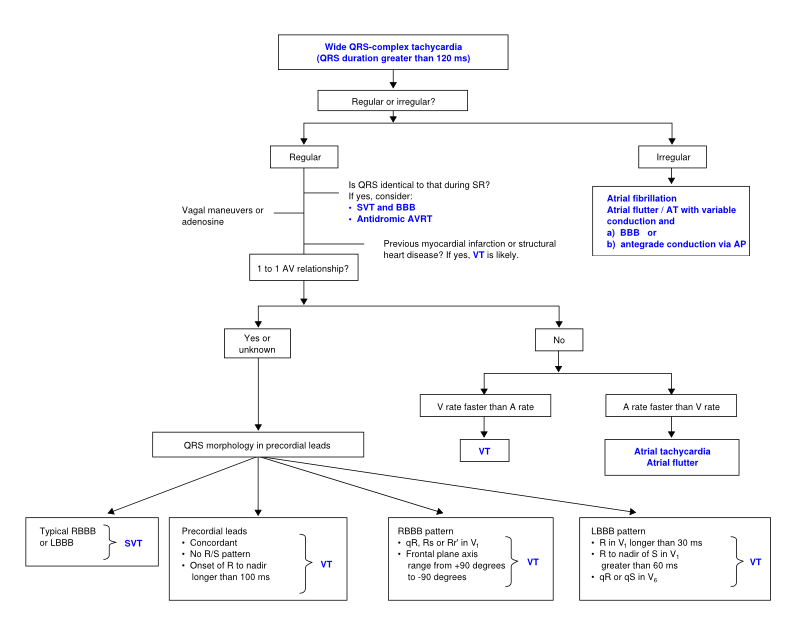 SVT vs VT algorhytm. Adapted from [1]

Several ECG algorithms have been developed to differentiate wide QRS-complex tachycardias. Most of them performed very well in the population they were based upon. A recent review tested five commonly used algorithms in a control population and found that each of them only performed reasonably well in differentiating VT from SVT (accuracy 66-77%).[2] The five criteria tested were: 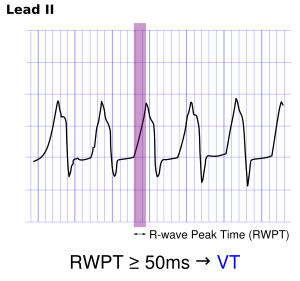 In 2010 Joseph Brugada et al. published a new criterion to differentiate VT from SVT in wide complex tachycardias: the R wave peak time in Lead II [4]. They suggest measuring the duration of onset of the QRS to the first change in polarity (either nadir Q or peak R) in lead II. If the RWPT is ≥ 50ms the likelihood of a VT very high (positive likelihood ratio 34.8). This criterion was successful in their own population of 163 selected patients and is awaiting prospective testing in a larger trial.