From ECGpedia
(Redirected from Wenkebach)
Jump to navigation Jump to search

Sequence of AV block from incomplete to complete

Conduction disturbances can occur at the level of the sinoatrial (SA) node, the atrioventricular (AV) node and the bundle branch system. In atrioventricular block the conduction between atria and ventricles is disturbed, leading to an increased PQ interval or to P waves that are not followed by QRS complexes: atrial activity that is not followed by ventricular activity. Three degrees of block can be distinguished. 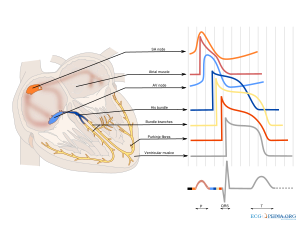 The PR duration depends on the conduction velocity in the atria, AV node, His bundle, bundle branches and Purkinje fibers.

1st degree AV block. Although the PQ interval is prolonged, all P waves are followed by QRS complexes: there is no dropout of complexes 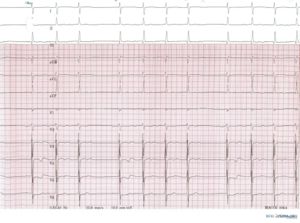 In second degree AV block type I, the PQ interval prolongs from beat to beat up until the drop-out of one QRS complex. The characteristics of a Wenkebach block:

The conduction disturbance in a type I block originates in the AV node. Isolated second degree AV block type I is relatively benign and not a pacemaker indication.

An important differential diagnosis of second degree AV block type II is an premature atrial complex with compensatory pause. This diagnosis is much more common and harmless.

High grade AV block is defined as two or more p-waves not followed by QRS complexes.

3rd degree AV block. AV dissociation is present: there is no relation between p-waves and the (nodal) QRS complexes.