From ECGpedia
(Redirected from Re-entry)
Jump to navigation Jump to search
File:Arrhythmia-mechanisms.svg
Mechanisms of arrhythmias

Conduction delay can cause a slow heart rate, as happens during AV conduction blocks. If conduction delay occurs more distally in the heart, i.e. within the ventricles, the QRS complex will widen and a left or right bundle branch block can be seen on the ECG. 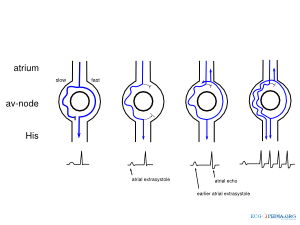 Re-entry. A prerequisite for re-entry is the presence of two pathways with differing conduction velocities that connect two points, in this case the atria with the ventricles. The signal splits in two at arrival, but no arrhythmia is initiated as the slow signal becomes extinct when it meets the fast signal. However, after an extrasystole (second image) the fast pathway is still refractory and conduction is by the slow pathway, resulting in a prolongation of the PR interval. The signal that reaches the His by the slow pathway may find the fast pathway conducting and return to the atria (third image), resulting in an echo beat. This may set in motion a re-entry pathway through the AV node resulting in AV nodal tachycardia (fourth image). 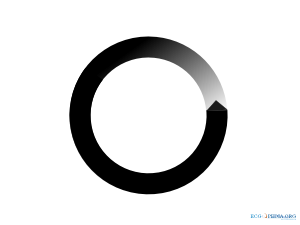 Re-entry is a common cause of arrhythmias. Ventricular tachycardia and AV-nodal re-entry are typical examples. Re-entry can occur when a conduction path is partly slowed down. As a result of this, the signal is conducted by both a fast and a slow pathway. During normal sinus rhythm this generally does not cause problems, but when an extrasystole follows rapidly upon the previous beat, the fast pathway is sometimes still refractory and cannot conduct the signal. Now the following sequence results in re-entry.