Difference between revisions of "Basics"

The aim of this course is to understand and recognize the normal ECG and to be able to interprete abnormalities. The course is divided in different sections. First the basics will be presented. This is followed by the interpretation of the normal ECG. Then abnormalities are discussed: (ischemia, arrhythmias and Miscellaneous). Finally the real world is presented in practice ECGs.

How do I begin reading an ECG? Click on the ECG to see an enlargement. Where do we look when watching an ECG?

Note that the lay-out is different for every machine, but all of the information above can be found.

Just like skeletal muscles, the heart is electrically stimulated to contract. This stimulation is also called activation or excitation. Cardiac muscles are electrically charged in rest. The surface of the cell is positively charged relative to the inside (resting potential). If the cardiac muscle cells are electrically stimulated (depolarisation: the outside of the depolarized region is positively charged relative to the inside) and there comes an action potential, the cells contract. Because of the spreading of the impulse through the heart, the electric field changes continually in size and direction. The ECG is a graphical visualisation of the electric signals in the heart. 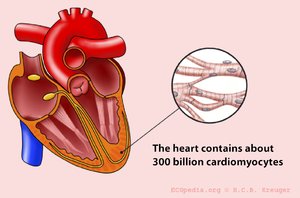 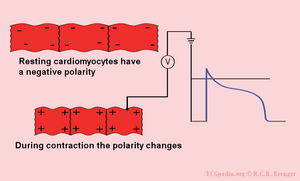 In rest the heart cells are negatively charged. Trough the depolarization by surrounding cells they become positively charged and they contract. 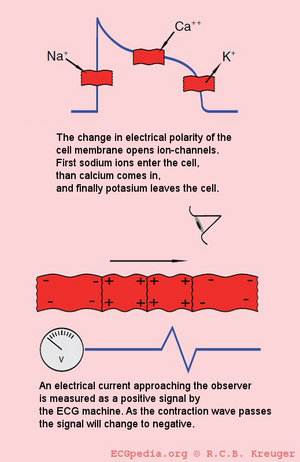 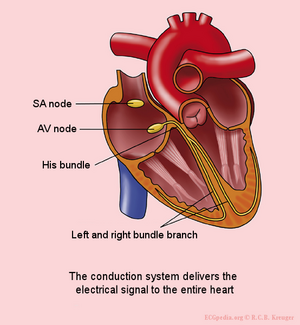 In the sinal node (SA node) are pacemakercells which determine the heart frequency.

First the atria depolarise and contract, after that the ventricles The electrical signal between the atria and the ventricles goes from the sinus node, via the atria to the AV-node (atrioventricular transition) to the His bundle and subsequently to the right and left bundle branch, which end in a dense network of Purkinje fibers. 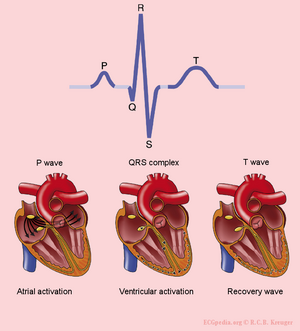 The origin of the diffrent waves on the ECG 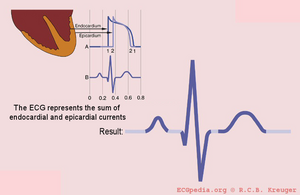 The QRS complex is the average of the depolarization waves of the inned (endocardioal) and outer (epicardial) cardiomyocytes. As the endocardial cardiomyocytes depolarize slightly earlier than the outer layers, a typical QRS pattern occurs (figure). In 1843 Emil Du Bois-Reymond, a german physiologist, was the to describe "action potentials" of muscular contraction. He used a highly sensitive galvanometer, which contained more than 5 km of wire. Du Bios Reymond named the different waves: "o" was the stable equilibrium and he was the first to use the p, q, r and s to describe the different waves. Du Bois-Reymond, E. Untersuchungen uber thierische Elektricitat. Reimer, Berlin: 1848.