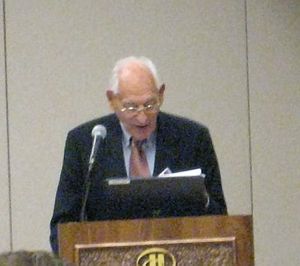 Dr Surawicz, is one of the inventors of the tangent mehod[1]. This picture was taken in November 2006, when he was 89 years old and still active.

The ST segment can present itself in many variants and sometimes this makes it difficult to determine the end of the QT interval. Here you will find some examples of 'difficult' QT segments and how the measure them.

Some controversy exists among cardiologists about when the end of the T wave. Lepeschkin was the first to describe the tangent method that is described in this chapter, and which is addored by most QT specialists.[1] Others allways measure the end of the T wave where it rejoins the baseline, which will often result in longer QT intervals. 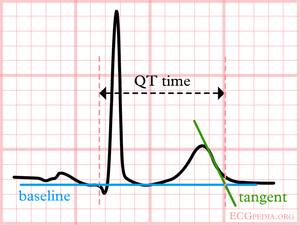 The T wave is broad, but the tangent crosses the baseline before the T wave joins the baseline. The QT interval would be overestimated when this last definition of the end of the T wave would be used. 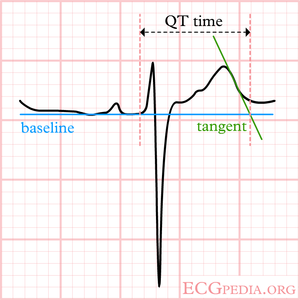 The ECG does not meet the baseline after the end of the T wave. Still, the crossing of the tangent and baseline should be used for measurements. 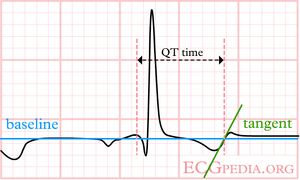 A bifasic T wave. The tangent to the 'hump' with the largest amplitude is chosen. This can change from beat to beat, making it more important to average several measurements.