Difference between revisions of "ST Morphology" 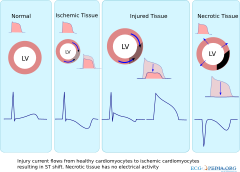 The T wave angle is the result of small differences in the duration of the repolarization between the endocardial and epicardial layers of the left ventricle. The endocardial myocytes need a little more time to repolarize (about 22 msec). This difference causes an electrical current from the endocardium to the epicardium, which reads as a positive signal on the ECG.[2] 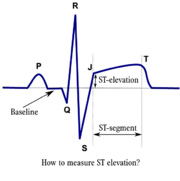 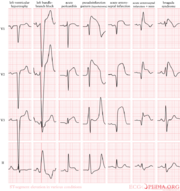 The most important cause of ST segment elevation is acute Ischemia. Other causes are [4][5]:

An important clue for the diagnosis of ischemia is the presence of reciprocal ST segment depression. 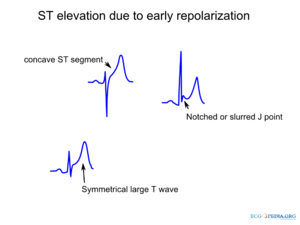 Early repolarization in inferior leads (II, III en AVF) has recently been found to be associated with an increased risk of cardiac death (1 mm of ST elevation carried an OR of 1.3 and 2 mm an OR of 3.0 )[8] 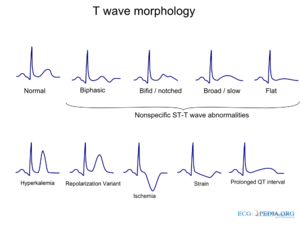 The T wave is quite 'labile' and long lists of possible causes of T wave changes exist. A changing T wave can be a sign that 'something' is abnormal, but it doesn't say much about the severity. T waves can be peaked, normal, flat, or negative. Flat and negative T waves are defined as:

A concise list of possible causes of T wave changes: