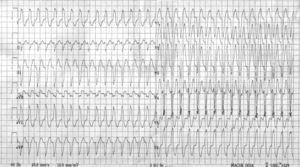 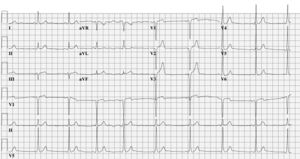 An otherwise healthy 24-year-old man was referred to our hospital because of drug refractory spells of palpitations accompanied by dizziness. These symptoms recurred several times a month and were terminated with intravenous adenosine. Figures 1 and 2 show the ECGs during palpitations and during normal conditions, respectively.

What is the most likely diagnosis and how can it be treated? 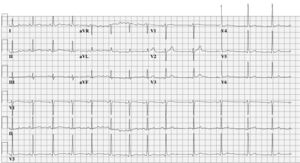 The above information should raise the suspicion of a Mahaim fibre. This is an accessory pathway with AVnode- like properties. Due to its decremental properties preexcitation is subtle and may even be absent. The Mahaim fibre only conducts in an antegrade fashion and usually has a long course, extending from the free wall of the right atrium across the tricuspid annulus to the right bundle. Consequently, tachycardias run in an antidromic direction and generally show an LBBB morphology with a superior axis. Although the original publications by Mahaim, who was a contemporary of Wenckebach, were on nodoventricular and fasciculoventricular fibres, his name survived all new insights and nomenclature published thereafter and is still used to paraphrase an entire family of accessory pathways with AV-node-like behaviour. In this patient the combination of subtle signs of preexcitation in the resting ECG, absent Q wave in leads I, V5 and V6, an RS in III and the wide QRS tachycardia with LBBB morphology and left-axis deviation is highly suggestive of the diagnosis of Mahaim fibre. During invasive electrophysiological testing a Mahaim fibre was identified running from the anterior site of the tricuspid valve annulus to the distal right bundle. The Mahaim bundle was successfully ablated at the level of the annulus. The ECG shown in figure 3 no longer reveals the subtle signs of abnormal initial activation or preexcitation. During follow-up, the patient remained free from symptoms.