A 61-year-old male was referred with symtoms of exertional dyspnoea and palpitations. He had suffered an anterior myocardial infarction two years previously, but had well preserved systolic left ventricular function. Diastolic function was, however, impaired due to hypertrophic cardiomyopathy which had been diagnosed many years ago. His ECG is shown in figure 1. Serial antiarrhythmic drugs and cardioversions had failed to restore sinus rhythm.

What is the diagnosis? And treatment? 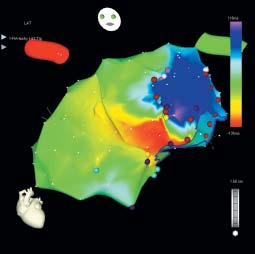 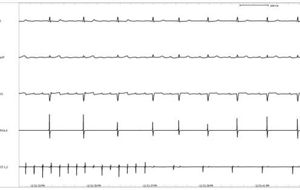 This patient has an atrial arrhythmia at a rate of 250 beats/min with a relatively slow ventricular response even off antiarrhythmic drugs. There is evidence of an old anteroseptal myocardial infarction. Given the diastolic dysfunction caused by his hypertrophic cardiomyopathy, the lack of atrial kick this tachycardia represents may at least partly explain the dyspnoea. Typically, atrial flutter is a right atrial reentrant arrhythmia, counter-clockwise around the tricuspid annulus and dependent on the cavo-tricuspid isthmus (figure 2). This results in the familiar ‘saw-tooth’ pattern of P waves, negative in the inferior leads, with a frequency of approximately 300 beats/min. The ECG shown here differs from this pattern in a number of facets (figure 3): the P waves are not saw-toothed but clearly circumscript and separated by an isoelectric segment, and although their frequency is in the typical atrial flutter range, the p-wave axis is wrong (p waves are positive in the inferior leads and V1, and negative in I and aVL). On the basis of this ECG, one should entertain the likelihood of a nonisthmus dependent atrial flutter, in light of the P-wave axis possibly left atrial.

The patient underwent an electrophysiological study using CARTO. This system allows the construction of an electro-anatomic map during tachycardia, clarifying the tachycardia circuit and hence guiding ablation therapy. Upon mapping of the right atrium, it was immediately apparent that this chamber was not the site of macroreentry. Rather, the earliest activation was at the interatrial septum representing breakthrough from a left atrial circuit. Following transseptal puncture, the left atrium was mapped. This revealed a ‘figure of 8’ pattern of reentry rotating around an area of lowvoltage, fragmented atrial electrograms in the inferoanterior left atrium (presumably representing fibrosis) and the mitral annulus. Figure 2 shows the CARTO map of both atria; the earliest activation is red, the last is purple. Linear ablation was performed to connect one electrical obstacle (i.e the area of fibrosis) with another (i.e. the mitral valve annulus). The tachycardia, which was terminated abruptly during ablation (figure 3), did not recur during follow-up (figure 4). Left atrial flutter is a rare diagnosis, often in the setting of prior cardiac surgery or structural heart disease as was the case in this patient. One or more loops of macroreentry are invariably present around either the mitral annulus or a zone of slow conduction (as was demonstrated in this patient) or a pulmonary vein.[1][2]

Ablation is a feasible treatment for this disorder, requiring careful electroanatomical mapping.