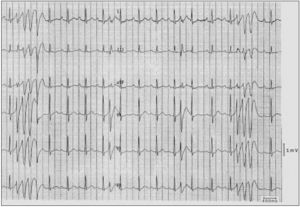 A30-year-old woman presents with repeated syncope. Her symptoms started a few months ago without a particular trigger. The repeated episodes are not preceded by triggers either. Occasionally she experiences some palpitations followed by dizziness or syncope. She feels healthy otherwise, has no relevant medical history and is not taking any medication. Physical examination reveals no abnormalities, nor does laboratory investigation or echocardiography. Her ECG is presented: leads II, III, aVF, and V4 to V6 are shown, calibration is given in the margin.

What is your diagnosis and what would your treatment be?

The ECG shows a sinus rhythm of 100 beats/min. The electrical axis is intermediate (positive QRS complexes in leads I and aVF). The PQ interval is slightly prolonged; the QRS width and morphology are normal. The ST-T segment looks normal and the QT interval is certainly not prolonged. There are two episodes of tachycardia with four broad QRS complexes and two isolated broad complexes with a similar morphology as the initiating beats of the tachycardia. The first two episodes have a changing morphology resembling torsades de pointes (TdP) and pointing to a ventricular origin. However, there are four important differences from what is usually referred to as TdP.

Recently, it has been suggested that the arrhythmia may be cured by radiofrequency catheter ablation.[1] Indeed, the monomorphic appearance of the initiating extrasystoles suggests a localised ventricular origin. Electrophysiological studies in these patients revealed that the origin was in the specialised conduction system and that targeted ablation of the initiating extrasystole was feasible (with favourable effects on arrhythmia recurrence). Long-term follow-up has to be awaited before the patient can be discharged without an ICD.[2]