From ECGpedia
(Redirected from Just an ordinary flutter?)
Jump to navigation Jump to search 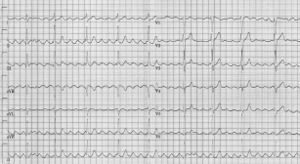 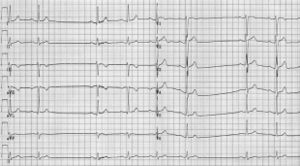 A 44-year-old male presented with palpitations. His medical history was otherwise uneventful and the family history revealed pacemaker implants in two of his father’s brothers in their fifties and in one of his brothers (mid-forties). His father was 74 years of age and without cardiac complaints. Physical examination revealed no abnormalities. The ECG presented in figure 1 was obtained. After an adequate period of anticoagulation therapy electrical cardioversion (ECV) was planned. Figure 2 is the ECG shortly after ECV. The patient was not on any therapy other than anticoagulants.

What would your diagnosis be and would you dare to speculate on the cause?