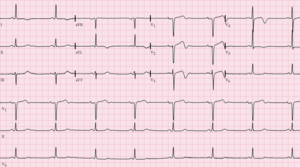 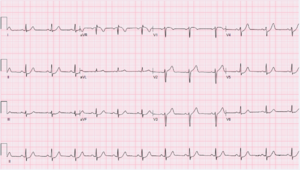 The De Winter ECG is sometimes seen in myocardial infarction with proximal LAD occlusion. It is rather rare (2% of cases). There is no anterior ST segment elevation. Instead the ST segment shows a 1- to 3-mm upsloping ST-segment depression at the J point in leads V1 to V6 that continues into tall, positive symmetrical T waves. The QRS complexes are usually not widened or only slightly widened, and sometimes there is a loss of precordial R-wave progression. In most patients there is a 1- to 2-mm ST-elevation in lead aVR. [2] Prof. Robert de Winter is an intervention cardiologist in the Academic Medical Center in Amsterdam, the Netherlands. 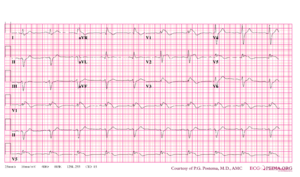 A 12 lead example of Brugada syndrome

The Brugada syndrome is an hereditary disease that is associated with high risk of sudden cardiac death. It is characterized by typical ECG abnormalities: ST segment elevation in the precordial leads (V1 - V3).[3] 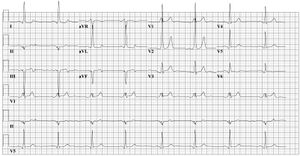 In 1930 Louis Wolff, Sir John Parkinson and Paul Dudley White described 11 patients who suffered from bouts of tachcyardias. Their ECGs showed two abnormalities: a short PQ time and a delta-wave. Ever since one speaks of the Wolff-Parkinson-White syndrome in patients with complaints of syncope and / or tachycardia and a pre-exitation pattern on the ECG (WPW syndrome = WPW pattern + symptoms). Not all patients with a WPW pattern on the ECG are symptomatic. The prevalence of the WPW or pre-exitation pattern is relatively common in the general population (about 0.15-0.25%).[4] Template:Cld

The prominent J deflection attributed to hypothermia was first reported in 1938 by Tomaszewski. These waves were then definitively described in 1953 by John J. Osborn (born 1917) and were named in his honor.[5]